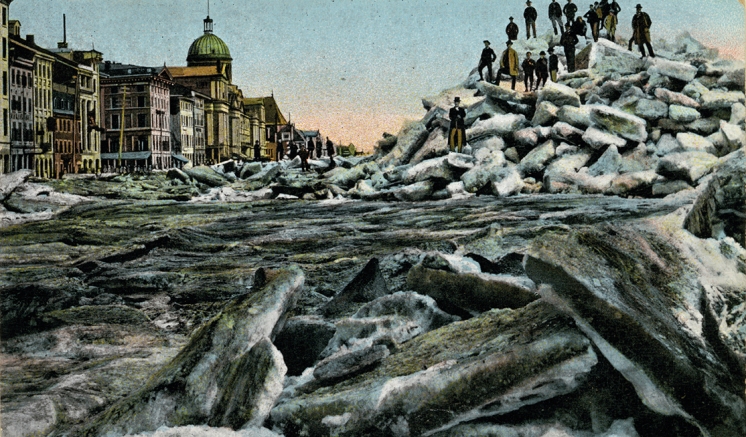 Inaugurated in 1847, the Marché Bonsecours celebrates its 170 years. As an integral part of Montréal’s history, silhouette and heritage, it is also an emblematic destination for visitors. Taking advantage of Montréal’s 375th anniversary celebrations, the Société d’habitation et de développement de Montréal (SHDM), responsible for the management and development of the Marché Bonsecours, dedicates an exhibition that highlights its history and place in our collective memory, in the form of postcards or giant photos. The 170-year-old Marché Bonsecours exhibition is presented as part of the World Press Photo Montréal, on the mezzanine of the main exhibition hall.

SHDM’s Managing Director, Nancy Shoiry, emphasized: “Participating in the vitality of Montréal also means making our built heritage better known, together with its contribution to our history and the evolution of an entire neighbourhood. This exhibition devoted to Marché Bonsecours recalls the daily life in this emblematic building during different eras and the place it occupied in the life of Montrealers for 170 years.”

“Since Marché Bonsecours is also known as a cultural venue that hosts many events each year, including the renowned exhibition of the World Press Photo, it is all the more flattering to be received in our own venues, as part of this popular event. A link is established from the outset between the two exhibitions since we drew from yesterday’s news stories magnificent journalistic photos and anecdotes of the time, all reproduced in giant format and exhibited in the mezzanine gallery.”

At Marché Bonsecours
325, de la Commune Est
Sunday to Wednesday, 10 am to 10 pm
Thursadyto Saturday, 10 am to midnight

Regarding Marché Bonsecours
With its silvery dome that shapes the Montréal landscape, Marché Bonsecours is recognized as one of the ten most beautiful heritage buildings in Canada. Designed by architect William Footner, it was home to the city’s main farmers market for more than a century, was subsequently repurposed to meet changing needs over the years by housing Montréal City Hall, the Parliament of United Canada, concert halls and banquet halls, training and armoury halls, and municipal offices. The Marché Bonsecours has become a must-see cultural and tourist destination, hosting events and exhibitions, as well as being home to the Conseil des métiers d’art du Québec, high-end ‘made in Québec’ designer boutiques, and restaurants that offer locally grown products.