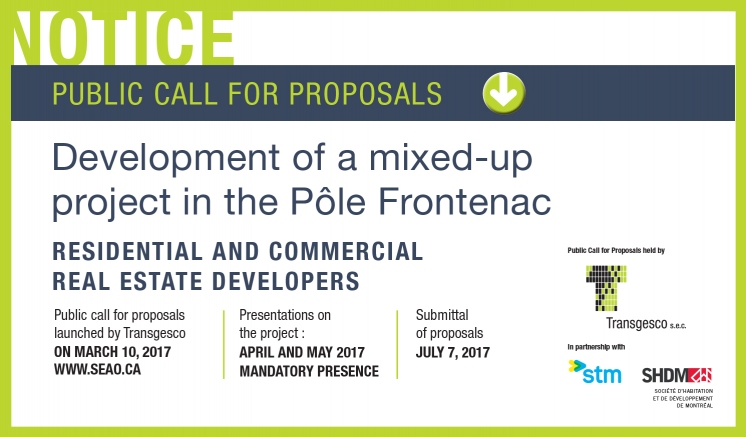 The Société d’habitation et de développement de Montréal (SHDM) invites residential and commercial real estate developers to read the public call for proposals to be launched on SEAO on March 10, 2017, by Transgesco, a subsidiary of the STM, for the building of a mixed use project near the Frontenac metro station.

Transgesco is entering a partnership with the Société d’habitation et de développement de Montréal (SHDM) and the Coopérative d’habitation Le Havre-Frontenac to develop a mixed-use real estate project on the land adjacent to the Frontenac metro station, and which will contribute to the revitalization of this sector of the Ville-Marie borough. A public call for proposals is therefore launched in order to select a developer capable of presenting a project that matches the partners’ ambitions by combining the construction of affordable and community housing, commercial spaces and a private residential offer.

The project will encompass:

Following the publication of the public call for proposals on March 10 on www.seao.ca, interested developers will be required to attend the presentations on the project that will take place during the months of April and May 2017. The date to present the proposals is set for Friday, July 7, 2017.

Regarding the partners
Transgesco, a commercial subsidiary of the Société de transport de Montréal (STM), develops various forms of partnership in order to increase commercial revenues by capitalizing on the strength of the ridership and the assets of the STM. For this project, Trangesco will be associated with the SHDM – a para municipal agency leading in the area of affordable housing and home ownership, which it promotes through its Accès Condos Program – and the Coopérative d’habitation Le Havre-Frontenac, which was founded in 2010 by a group of citizens of the Sainte-Marie neighbourhood wishing to develop a housing project intended mainly for families.