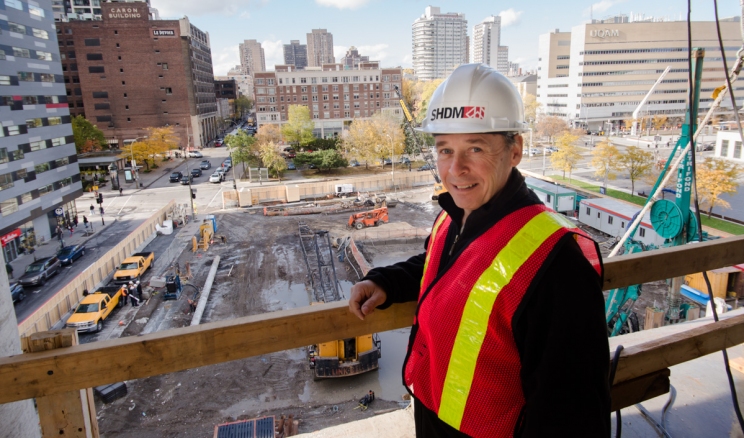 This is it! The Îlot Balmoral project is underway. For several weeks now, workers are busy constructing the building’s foundation walls, which will also serve as retaining walls. Indeed, rather than opting for the conventional technique of a Berlin wall, the project team opted for the technique of the diaphragm wall.

What is a diaphragm wall?

It’s a concrete wall, poured into the ground to a depth of between 16 and 18 meters, serving both as retaining wall and foundation for the building to be constructed. To cast this wall, two low walls are constructed in the ground to define the thickness of the future wall. They are used as a guide to ensure the alignment of the excavation when digging deep trenches using a specialized excavator. Throughout the excavation, the trench is immersed with bentonite slurry whose properties make it possible to stabilize the walls. Once the excavation is completed, a reinforcement cage is inserted. As concrete is gradually poured into the trench, the mud is pumped out and recovered to be reused for the excavation of the next section of the foundation. The process is repeated all around the foundation’s projected area, by sections of ten meters in length at a time.

This technique was first developed for the foundations of very large buildings. The twin towers of the World Trade Center in New York were in fact built using this technique back in 1966. Exposed after the attacks, the diaphragm walls are at the heart of the National September 11 Memorial.

When asked about this technique, Marc Tousignant, site supervisor at the SHDM, says that in a more than 30 year career, this is the first time he witnesses such a maneuver on a construction site. "It's one of the reasons why I love my job! There are always new things to learn. Besides, I'm not the only one. Most guys on the site are all as excited to work with this type of construction. Very few buildings in Montréal have made use of diaphragm walls. "

Marc Tousignant specifies that if the technique is much more expensive than other more conventional methods, it has many benefits and can even translate into savings on the costs of the subsequent phases of the project. For example, it enables controlling water infiltration from the ground at the perimeter of the excavation as well as stabilizing soils during excavation. With the foundation wall in place after the mass excavation is completed, building of the concrete structure can start in spring of 2016, presenting the noteworthy advantage of not having to carry out this type of work during the winter period.

We look forward to the rest of the story! Once the diaphragm walls are built, excavation and site decontamination can start. We’ll tell you more soon after New Year!